1981 saw some shady dealings in a smoke filled back room of the local pub, from the ramblings of a few young drunken men, the club which was originally called Kingswood Clay & Roughshoot Club, came into being!

With borrowed traps and local land owners permission it all started to come together, the Land owners were given Honorary membership of the club, The club first purchased its own manual traps the following year in 1982 at the same time the club then joined the CPSA with the insurance covering 20 members, also this year Hartican Ready Mix Ltd sponsored 2 trophies which would remain in the club headquarters, 1983 saw the first Sea Shoot for the club, jumping forward to 1985′ saw the famous Grouse shoot with the final being held in London in 1986 took place, also this year saw the club shooting against Bexhill shooting club with a home and away leg, this turned out to become an annual event for many years to come.

During the following years the club went from strength to strength, by 1989 the club was involved in many activities, Trophy shoots on the 1st Sunday in the month from May to September, Bexhill shoot, BBQ shoots, holding their own open shoots, the popular annual sea shoot where members shot off the back of a ferry on the way over to France, and on top of that they organised many dinner & evening dances with live music for members & guests alike, also by now the membership had grown to 48 and had be split into 3 squads and take it in turns on Sundays for Practicing, the most ever members were 55, busy times indeed!

The 90’s saw the club going even further afield, 1991 saw a member of the club move to wales and join a local club called St Brides Major, it was from this the now very popular Welsh Shoot was conceived, Present day, May bank holiday see the club go down to Wales and shoot in their quarry and on the August bank holiday see the return leg where the Welsh come up to us, still as popular now as it was then.

The 90’s also saw the club add to their diary other events such as local Cricket matches and even an Archery / shooting event with a local club, where shotguns were replaced with bows and arrows and vice versa!

The start of the Sunday Sporting League shoots was also born, today there are 6 clubs that take part and each month one of the clubs host the event and after all 6 rounds have been shot there is a final, this event runs all year and is split into the Summer and winter rounds, again from humble beginnings has started a very popular & well supported inter clubs event!

In 1992 the club got sponsorship from Linde Gas & Chambers Engineering Ltd for hosting an Open shoot at Peartree Farm where owner Pete Sherriff, another long standing pillar of the club and very instrumental in many of the clubs activities from the start kindly hosted it, all the sponsors required was for a few banners to be shown and a small number of guests to be hosted on the day.

This decade also saw the club sell off their manual traps and go over to automatic traps, some which we still use today.

Unfortunately not all good news! Roger Phillips, a long time pillar of Kingswood club passed away in 93, and his family kindly donated a trophy for a memorial shoot which is still held today, we combine this with the return of the Welsh leg and is still very well supported!

Another long term member also passed away a few years later, Mr Fred Dymock, Fred owned some land which is now owned by Quainton Railway Society, where every Boxing Day there would be wood burning in old oil drums to keep you warm and a never ending supply of mince pies & whiskey this was the legendary boxing day shoot! We have a memorial trophy too, donated from Fred’s family and this event is also very well supported, the family also come along as our honorary guests.

Both Fred and Roger were highly thought of and by all accounts both fantastic character’s, we are proud to honour them each year! 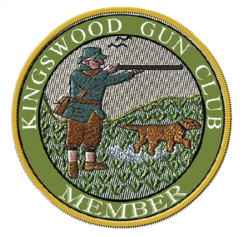 The following years followed the same format with a full diary for the club but unfortunately with the ever changing times saw the early part of the 2000’s events such as the Archery/shooting events, the annual Bexhill Shoots, the local cricket matches even the open shoots phased out due to new ground permissions, Government rule changes, member support from all parties concerned and so on.

Present day shows the club still very much involved in the “original” shoots albeit with half the members the club have had over the years but still involved with events such as the Sporting league Shoots, Welsh shoot, club Memorial trophy shoots etc, the club name got abbreviated to Kingswood Gun Club this year as part of the revamp to bring the club up to date and into the 21st century, we still hold practices on the 1st & 3rd Sundays of each month, the membership is now on the way up again and other club activities are being added in all the time now!